Edson arsonist who burned down concessions, pet store, gets 10 years 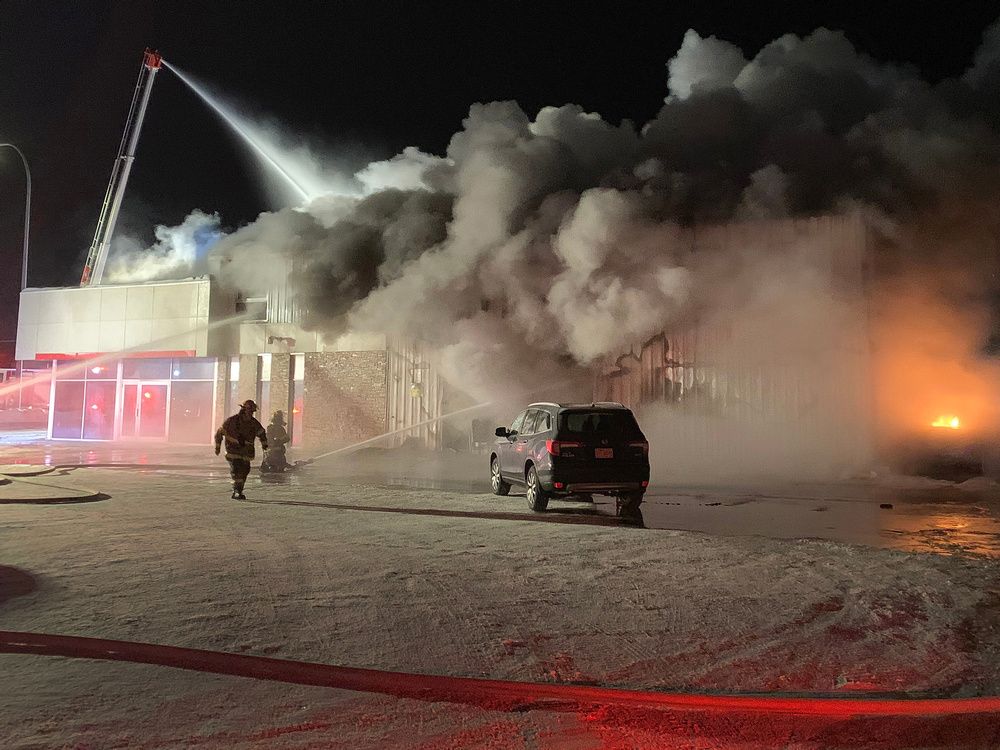 Edson arsonist who burned down concessions, pet store, gets 10 years

A repeat offender who killed a Chihuahua puppy after setting fire to two car dealerships, a pet store and a gas station has been sentenced to 10 years in prison, concluding a trial repeatedly delayed by his unusual behavior.

Thomas, Hinton Provincial Court Judge Achtymichuk imposed the sentence on Thomas James Berube on Friday, a week after the 39-year-old pleaded guilty to nine counts related to breaking and entering and arson in the Edson area two years ago . The sentence was a joint submission by the Crown and Berube, who represented himself after firing his lawyer.

Sign up to receive daily news from the Edmonton Journal, a division of Postmedia Network Inc.

Thank you for your registration!

A welcome email is on its way. If you don’t see it, please check your spam folder.

The next issue of Edmonton Journal Headline News will soon be in your inbox.

We encountered a problem during your registration. Try Again

“Based on the information available to the court, the motive was greed,” said Achtymichuk. “His actions show complete disregard for the suffering inflicted on people, animals and communities, all to sell stolen goods for a few thousand dollars.”

Berube pleaded guilty to the crimes after a touch-and-go trial repeatedly interrupted by what Achtymichuk called it “ploys” to delay proceedings. Most notably, Berube removed all five toenails from one foot during the trial, prompting the court to order an evaluation of his fitness to stand trial, which Berube declined to participate in.

With credit for pretrial detention, Berube still has about 6 and a half years to serve. He has 83 prior convictions, mostly for thefts and break and enters.

Between December 2019 and February 2020, Berube burned down Honda and Chrysler Dodge Jeep dealerships in Edson, KW Pets in Whitecourt, and a Niton Junction Petro-Canada, causing millions of dollars in damage. He also set fire to a stolen truck used in one of the burglaries. In all five cases, Berube recruited accomplices, most often a teenager who is currently serving a nine-month sentence for his role in the crimes.

Berube admitted to setting the fires to destroy evidence of the burglaries, which totaled a few thousand dollars in stolen tires and portable generators. Berube also had his teenaged co-defendant steal a Chihuahua puppy named Striker from KW Pets, which Berube later killed and dumped in a ditch after realizing it tied him to the crime spree. The KW Pets fire killed all the animals inside, including hamsters, birds, rabbits, mice, gerbils, guinea pigs, snakes, lizards and fish.

The most serious crime, for which Bérubé faces a maximum sentence of life imprisonment, is the fire he started late at night after breaking into the Petro-Canada. Crown Attorney Photini Papadatou said that if not for a passing motorist who called 911, the 18 guests at the adjoining motel could have died because the building’s smoke detectors failed.

“None of the motel residents knew about the fire until they were woken up by firefighters,” she said.

“Many people have lost their jobs because of these crimes, temporarily or permanently,” Achtymichuk, adding that Berube’s actions have caused “overwhelming fear and anxiety” in communities.

Bérubé and the teenager were arrested by the RCMP in Spruce Grove on February 27. An earlier trial was delayed when Berube fired his attorney. Achtymichuk refused to delay the trial after Berube fired Robert Gladu, his fifth lawyer, on August 23.

Berube repeatedly claimed to have an unspecified mental illness, which he blamed for his actions. In addition to pulling out his toenails, Bérubé repeatedly refused to speak to Achtymichuk and later claimed he was talking to bugs in the courthouse holding cell.

After Achtymichuk found him fit to stand trial, Berube bit his arm until it bled, leading the sheriffs to place him in a special protective helmet.

Achtymichuk said that while Berube may have mental health issues, there was no evidence to suggest he couldn’t follow through or had trouble understanding that his crimes were wrong. Berube showed no signs of his previous behavior and was reserved and polite during Friday’s hearing.

“There is nothing in court to indicate remorse or acceptance of responsibility,” Achtymichuk noted.

Achtymichuk agreed to give Berube two days’ credit for each day he spends on remand, dropping from a standard day and a half to one due to the ‘unusually harsh’ conditions at the Edmonton Remand Center during the pandemic.

He also agreed to stop ahead of the Crown’s proposed lifetime ban on owning a pet, instead imposing a 10-year ban that would begin while Berube was serving his prison sentence. Berube said he has a dog who currently lives with an aunt.