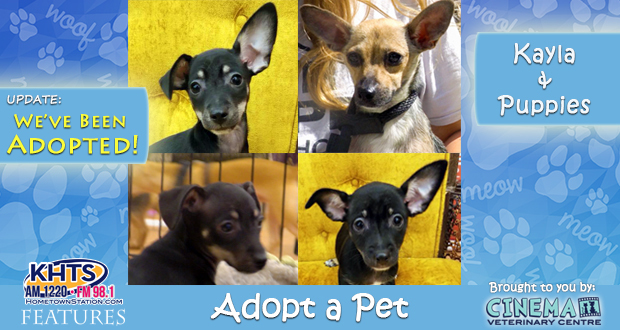 Just one day after arriving at the shelter, 2-year-old Kayla gave birth to three puppies, risking herself and her newborns to be euthanized due to the extra care they needed. But volunteers from Shelter Hope Pet Shop Santa Clarita intervened immediately to save the new family’s life.

“(Moms and babies) are usually at high risk in the shelter, so we’re going to… take them out and get them to safety,” said Dani Caouette, the owner of the rescue. “We took them out when they were one day old, and now they’re 10 weeks old. So they’re all looking for a home, and mom is also looking for her home.

Kayla is an incredibly easy-going puppy who enjoys kissing, playing with other dogs, and receiving love from children, and Caouette has noted that she would make a great family dog.

“It can fit into any home,” said Caouette. “The first thing she did when I met her was she started kissing me. She was amazing even with her babies… She is just perfect.

The puppies – two boys and a girl named Sheldon, Lionel, and Skylar – are filled with playful puppy energy, with Skylar being a bit more shy than his brothers.

“They all love puppies, ready to find their homes,” said Caouette. “We’re just finishing their vaccines, and then they’ll be spayed and spayed as soon as they’re old enough.”

Although Kayla is already clean, sterilized and up to date on her vaccinations, the puppies will need more time as they grow older, according to Caouette.

“We tell people, make sure you have enough time to spend on training,” she said. “There’s potty training, they’re going to bite the bullet and end up getting fixed … for you.”

To learn more about Kayla, Sheldon, Lionel and Skylar, or the adoption process at Shelter Hope Pet Shop Santa Clarita, call (661) 855-4716, stop by the boutique in downtown Westfield Valencia , Where Click here.

About the Adopt a Pet Series from KHTS

Every Wednesday the KHTS adopt a pet The series features an adoptable animal from the Santa Clarita Valley in need of a home. The KHTS Features team travel to various shelters and shelters in Santa Clarita to meet the pets and tell their stories in hopes of helping them get adopted. First launched in August 2016, the series has partnered with seven local rescues, as well as the Castaic animal shelter, to feature nearly 100 dogs, cats and rabbits, and has seen 76 – and more – adoptions so far. ‘now. The series was created by Melissa Lampert-Abramovich, who has over 10 years of experience in the animal rescue world and co-founded Madeline’s Angels Pet Sanctuary in Santa Clarita in 2016..

KHTS adopt a pet brought to you by:

See the complete collection of KHTS Stories and Videos on hometownstation.com here.