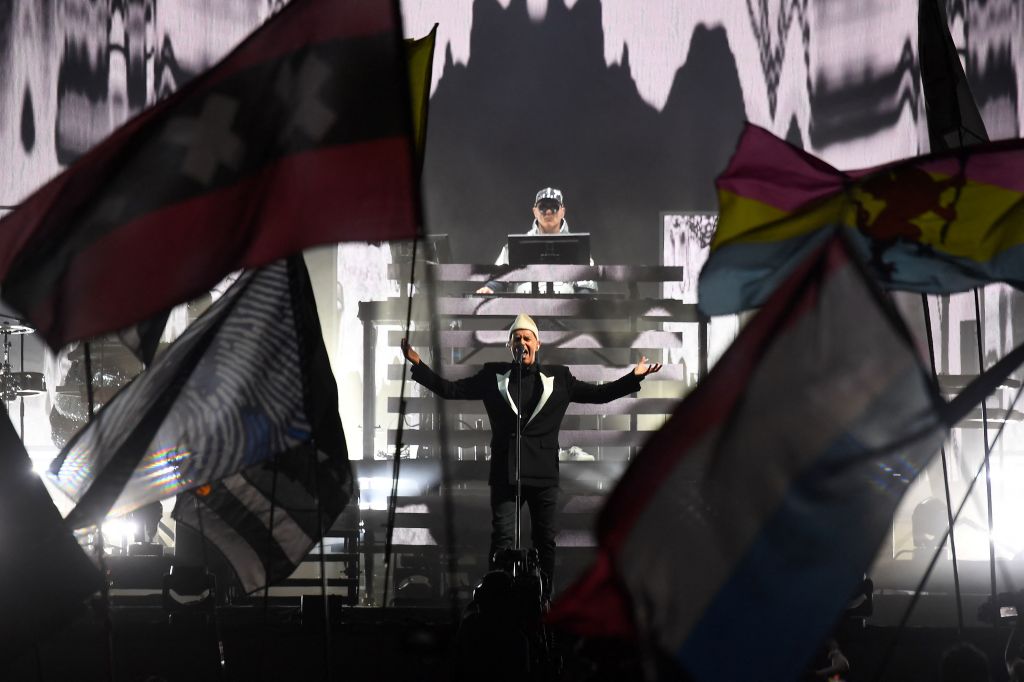 A group of 60-something Brits packed the Minneapolis Armory on Sunday night and delivered a dazzling, nostalgic evening of ever-powerful electronic hits.

Pet Shop Boys and New Order announced their joint North American tour in February 2020, just weeks before the world went into pandemic lockdown. Two and a half years later, they finally made it to Minneapolis – one of 13 shows on the tour – and it was well worth the wait.

Both groups emerged from England in the 80s with unique interpretations of pop music. The Pet Shop Boys made some witty, archaic, and fairly cheerful songs (even though lead singer Neil Tennant didn’t come out publicly until 1994 and keyboardist Chris Lowe never discussed his sexuality). New Order, meanwhile, rose from the ashes of post-punk band Joy Division (whose vocalist Ian Curtis killed himself the day before the band’s first US tour) and fused guitars and guitar-playing bass with electronics.

The combined draw of the two acts – who trade places each night – allowed them to perform in a much larger venue than usual. PSB’s three previous local shows have taken place at the State and Orpheum theaters, while New Order’s only Minnesota concert of the 21st century took place at the Palace Theater in 2018.

Sunday night, the Pet Shop Boys took the stage shortly before 7:30 p.m. after a set by legendary DJ Paul Oakenfold (who returned for a second set before New Order). At 68, Tennant is the oldest musician on the tour, but he still exudes youthful energy. And, as always, Lowe played the role of stoic sidekick, mostly standing still behind his keyboards and barely acknowledging anything around him, including the crowd.

Over the past 36 years Pet Shop Boys have maintained a prolific career with 14 studio albums, over 70 singles and a host of other projects. But the couple had never mounted a greatest hits tour until this summer in Europe. Current dates reduce the 26-song list to 19 tracks, presumably to match New Order’s 80-minute runtime.

That meant some true PSB classics — “Go West,” “What Have I Done to Deserve This” and “New York City Boy” among them — didn’t make the cut on Sunday. But the whole thing still beat with constant energy, from the clever “Opportunities (Let’s Make Lots of Money)” to the sordid “It’s a Sin”. The duo’s covers were also a lot of fun, including Stephen Sondheim’s “Where the Streets Have No Name (I Can’t Take My Eyes Off You)”, “Always on My Mind”, “It’s Alright” and “Losing My Mind”. . (the only B-side of the evening).

Highlights from a set full of them included the lush “Love Comes Quickly” and a ferocious “Domino Dancing” with the audience singing the choruses. Tennant barely breathed between songs, giving the show a real forward momentum that continued through the encores of “West End Girls” and “Being Boring.”

New Order – whose live show was notoriously random at the time – didn’t have quite the same urgency, and lead singer Bernard Sumner lost some of his voice. At times the 66-year-old would shout his lyrics and at other times attempt to slip into a croon with limited success.

The band more than succeeded, both recreating some of the era’s most accurate songs and occasionally adding a new twist. And bassist Tom Chapman did an admirable job of tackling Peter Hook’s truly iconic sound. (Hook left the band in 2007 and now does terrific solo tours devoted to entire New Order and Joy Division albums.) Oh, and they were loud, too, giving songs like “Blue Monday” and “Age of Content” a real arena rock. weigh.

Along with a curated selection of tracks from New Order’s 80s heyday – “Subculture” and “Temptation” stood out – they played a pair of songs from their latest album, 2015’s “Music Complete”, but sadly the epic banger “People on the High Line” (the band’s best song in decades) wasn’t one of them.

They also released their recent single “Be a Rebel,” which suffers from a few tasteless lyrics (“You’re just different, it’s OK…Be a rebel, not a devil,” the chorus goes). But, again, the band played it with such conviction that it was hard not to be won over.