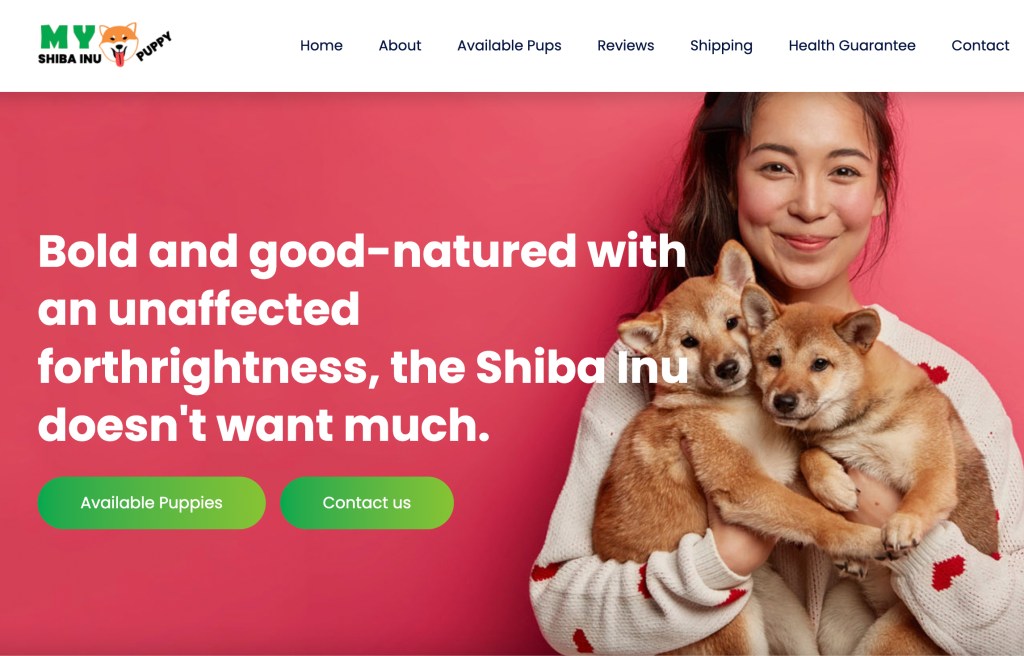 Google is targeting an alleged scammer engaging in “particularly nefarious” frauds similar to online romance scams, but using photos of adorable purebred puppies to “prey on vulnerable victims during an unprecedented pandemic”.

The Mountain View tech giant this week sued a person it believes to be Cameroonian, accusing him of organizing “multiple international non-delivery scams in an attempt to exploit the COVID-19 pandemic and the resulting high demand for puppies in the United States”. to online advertisements would be tricked into sending hundreds of dollars in exchange for puppies that never arrive.

The lawsuit filed in the U.S. District Court in San Jose contains embedded examples of online advertisements showing photos of floppy-eared basset hound puppies with large, moving eyes. A young dog would be called Boris and another would be called Hatie, each selling for $700.

Of the 20 sites, the most recent was registered in late March, indicating that the fraudster “will continue to commit fraud and abuse Google’s services unless caught,” the lawsuit said.

A Tuesday review by this news agency of the websites listed in the lawsuit as fraudulent showed that six of the 20 were still active.

Pet adoptions have surged during the pandemic as people seek animal companionship amid isolation imposed by the virus and public health orders. And online scams have increased dramatically during the COVID pandemic, with consumers avoiding in-person purchases. Last year, “pet scams” ​​accounted for 35% of all online shopping fraud, according to the lawsuit, citing the Better Business Bureau. A study showed that puppy scams increased 165% in the United States from January to October 2021 compared to the same period in 2019 before the outbreak, according to the lawsuit.

Google claimed in the lawsuit that the scammer used several of its services, including Gmail and dozens of fraudulent Google accounts, in violation of the company’s terms of service. The company said it had shut down accounts and services linked to the scam, but web hosting companies continued to allow “new fraudulent websites to appear”.

The sham “follows a similar storyline to many other online scams where malicious actors pretend to be someone they are not to convince victims to part with money for something they will never receive. “, said the lawsuit. “Examples of other such scams include illicit prescription drug scams, romance scams targeting widows and widowers, loan scams targeting veterans, and investment scams targeting the elderly.” The puppy scam “exploits the joy of adopting a pet, resulting in both emotional harm and financial loss,” according to the lawsuit.

While the lawsuit focuses on “non-existent” young bassets for sale, it also claims that one of the websites was selling non-existent Maltipoo puppies and lists allegedly fraudulent sites using titles containing dog breeds including shiba inu, Havanese, French Bulldog, Westie and Dachshund, as well as two referring to Maine Coon cats.

Google is seeking a court order barring the alleged fraudster from using its products and wants the court to shut down the allegedly fraudulent websites. The company is also seeking unspecified damages.

Puppies as well as adult dogs and other animals are now available at the Peninsula Humane Society in Burlingame, spokeswoman Buffy Martin Tarbox said. “Our dogs aren’t too good to be true,” Tarbox said. As with online romance scams, potential dog owners can fall in love with a potential pet — even an animal legitimately up for adoption — based on the animal’s photos, Tarbox said. Anyone interested in adopting a dog can visit the shelter and talk to staff to make sure they’re adopting a pet that fits their lifestyle and preferences, Tarbox said.